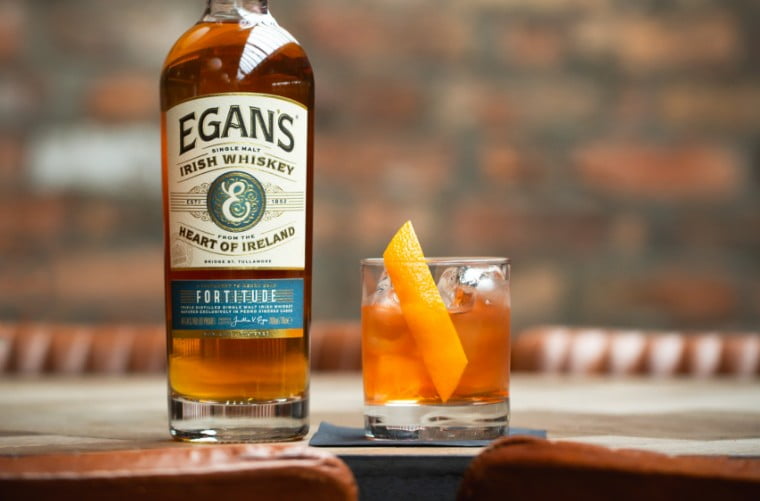 According to the Egan website, the Egan family has a lengthy history of producing whiskey that dates back to 1852 in Tullamore, a county town in the Irish Midlands. For 116 years, P.&H. Egan, LTD. grew to be one of the biggest mercantile firms, bonders, and manufacturers in the nation. Fifth and sixth generation Maurice and Jonathan Egan reinvented the brand in 2013.

“His stalwart character and fierce resolve made him a passionate Irishman and formidable businessman, leading the Egan name to become one of the most recognized whiskey brands in Ireland. With the marriage of sherry and single malt Irish whiskey, Fortitude is a nod to that time in our heritage when Henry sought to bring the best of Ireland to the world, and best of the world to back home to Ireland.”
- Jonathan Egan

Egan's Fortitude Single Malt Irish Whiskey is produced by the Egan's team and thoroughly matured in Pedro Ximenez sherry casks. There is no reference to age. Balance is a concern because sherry wine finishes can be hit or miss. In my review for this Irish whiskey, I found that sherry effects have increased over time. I was therefore quite interested in this one. The colour seemed a little lighter at first glance, which can give an idea on the age of this whiskey.

I'm always moved by the family whiskey tale. It seems to be a reference to when and what we consume. Usually, there is a tale to be told, either from the viewpoint of the distillery or the person consuming it. The encounter is unique in that regard. It may be a celebration, the death of a loved one, or just a hankering for whiskey. Whatever the occasion, it's creating a new memory.

The milk chocolate component adds a playful aspect to the taste. It had a strong enough degree of proof to keep things daring and exciting. The little bit of smoke is also a wonderful element as the temperature drops. You should absolutely try a sip at a nearby pub or restaurant to make up your own mind, it's worth a try!

Appearance: A light yellow that resembles a straw in the early spring. There were many, many legs of a light viscosity in the glass.

Nose: There is initially a significant quantity of musty barnyard, and then the fruit components arrive. Elements of honey and fall fruit are kicking it in the background.

Palate: It took some time to get to know this one completely. Smoked green tea, honeydew, milk chocolate, and a hint of smoke are the primary flavors. For a whiskey with such a light body, the finish is additionally robust and contains a hint of pine nut.