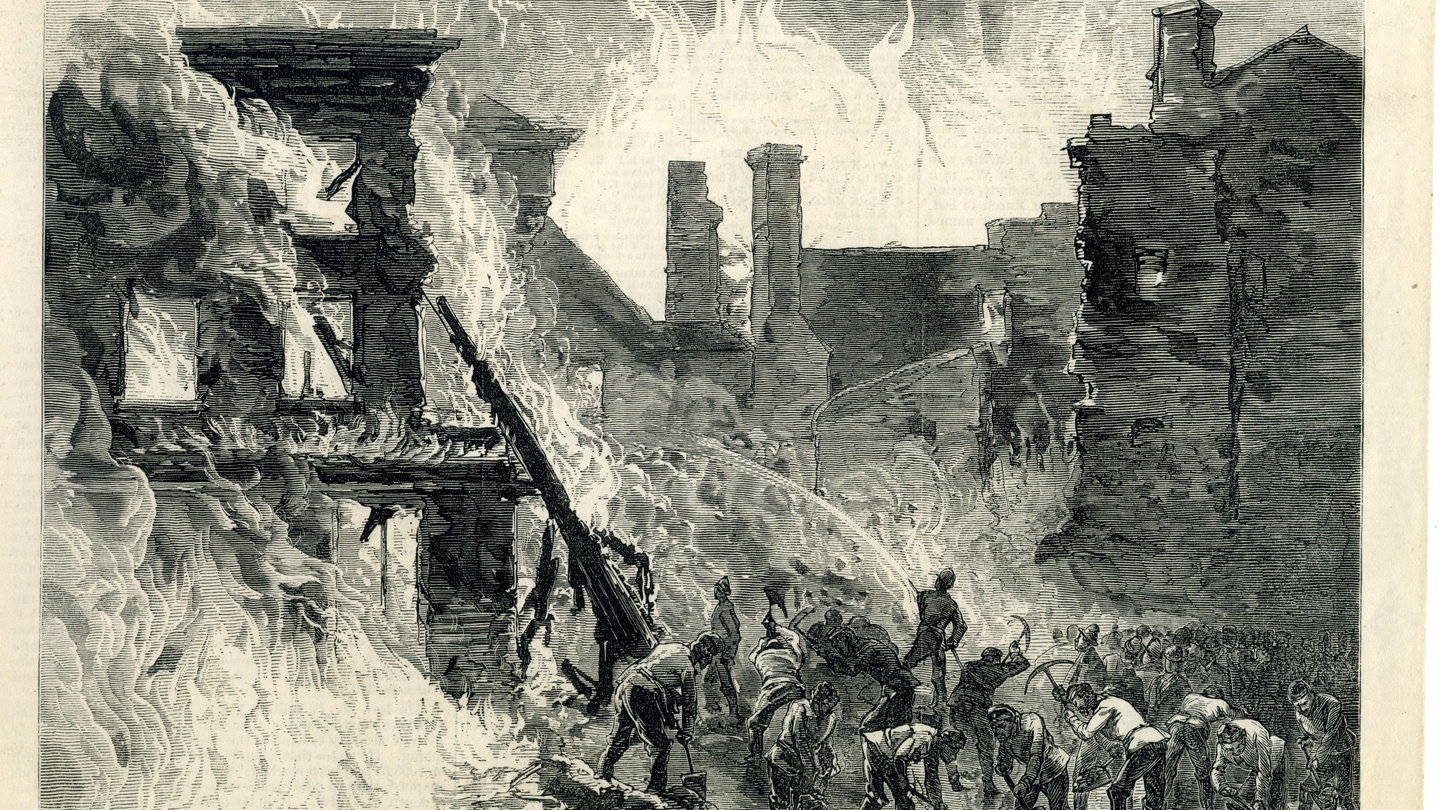 The Dublin Whiskey Fire of 1985, also known as The Great Liberties Whiskey Fire of 1875 took place on June 18 that year, resulting in the loss of 13 lives and over €6 million worth of damage in whiskey alone. James Smith, William Smith's father, confirmed at his son's inquest that he was a laborer, single, and 21 years old at the time of his death.

That occurred on Tuesday night. The previous Friday, William and John McGrane met in the north inner city of Dublin at the intersection of Bow Street. Word of a massive fire devouring the Liberties was fast circulating. On June 18, 1875, at 10 o'clock at night, the two young men made the decision to traverse the city to look.

Malone's malt house and a bonded warehouse on Chamber Street, where around 5,000 barrels of whiskey and other alcoholic beverages were being housed, were checked earlier, at 4.45 p.m., and everything was in order. The alarm was set off at 8 o'clock, according to a story in The Irish Times. 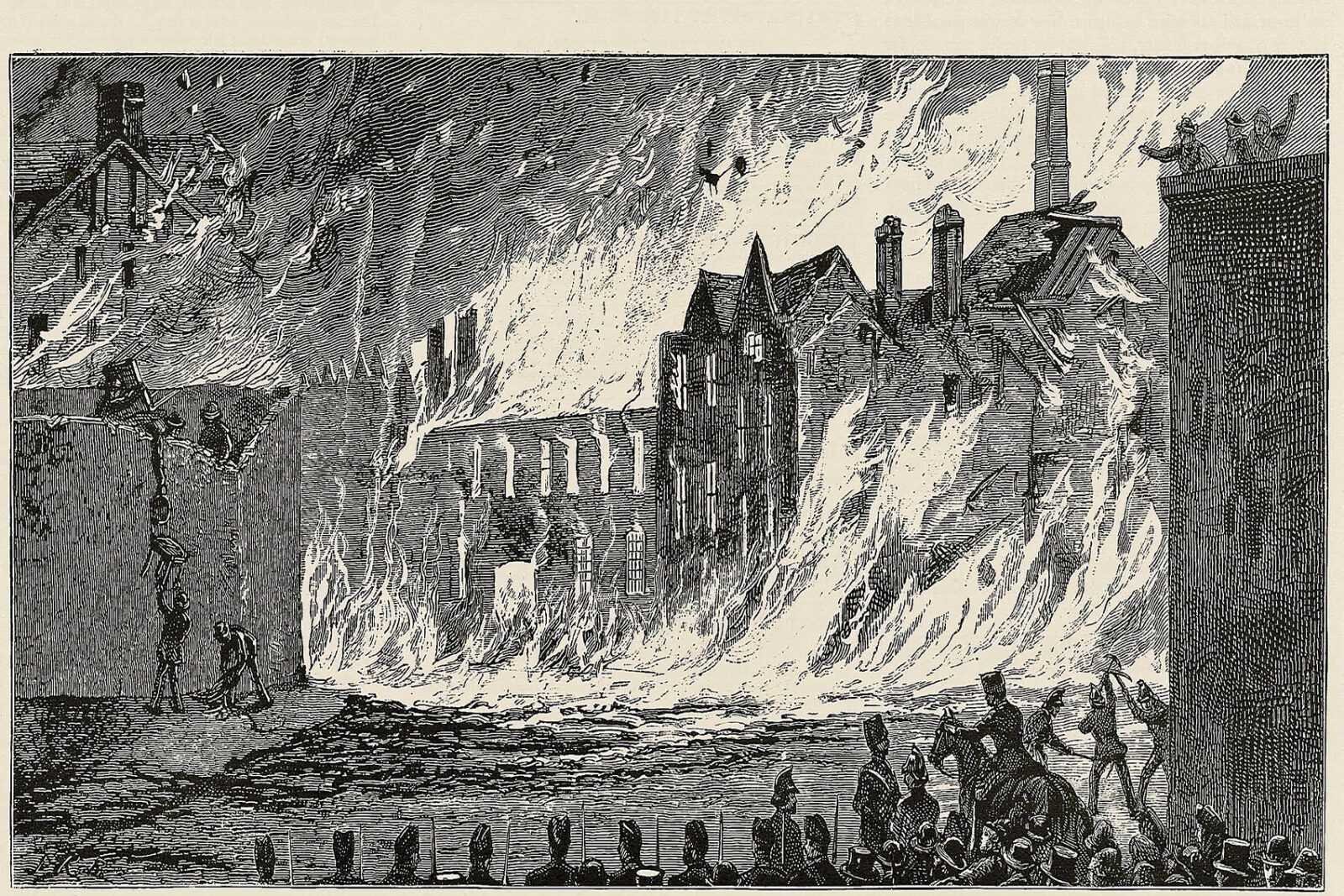 The flames immediately grew. The wooden barrels carrying the alcohol caught fire as the flames approached them and burst open, spewing a scorching river of whiskey over the streets. When William and John left for the fire, the flow was more than 400 meters long, 2 feet broad, and 6 inches thick on one side of Mill Street.

At the time, there was a lot of livestock in the city, and the squeals of escaping pigs added to the mayhem as the tenements quickly became empty. Crowds flocked along the alcohol stream amid the "frightening" commotion; for many, the inferno represented a once-in-a-lifetime experience. 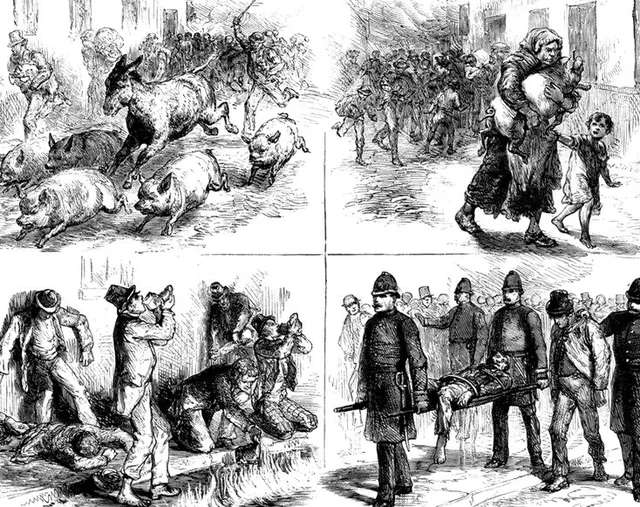 The Irish Times reported on June 21 that caps, porringers, and other vessels were in great demand to scoop up the alcohol as it streamed from the blazing buildings. Disgusting as it may seem, several men were seen taking off their boots and using them as drinking cups.

What was the outcome? Eight males were sent to Meath Hospital while unconscious, twelve to Jervis Street Hospital, three to Stevens' Hospital, and one young person to Mercer's Hospital. Even so, these figures do not encompass all those who were rendered ineffective by alcohol.

There are believed to have been 13 fatalities overall as a result of the fire. None of the victims died in the fires or from smoke inhalation; instead, they all died from alcohol poisoning after consuming "freely of the derelict whiskey."

William drank from the flow close to the Coombe, "scooping it up with his cupped hands," according to Mr. McGrane's description. He was a heavy drinker. I sipped my beverage from a jug. The majority of people were drinking it.

"(The) deceased fell and lost consciousness all of a sudden. Two men, total strangers, assisted me in carrying (William) up to Meath Street on the way home. We later encountered some other men, neighbors, who assisted in bringing him the remaining distance. 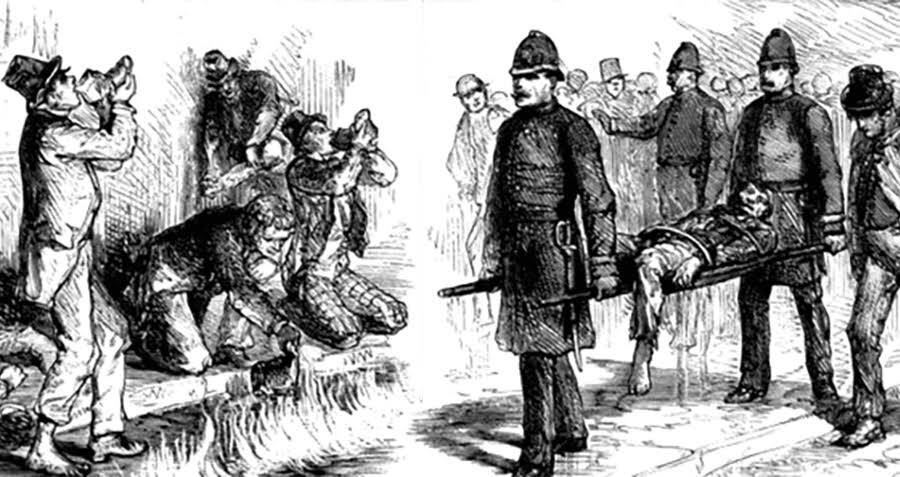 William arrived home shortly before midnight and was brought to Richmond Hospital the next morning in a state of “profound coma”. He improved slightly under treatment, even regaining consciousness at one point, but died on Sunday night as a result of alcohol poisoning.

Some of those hospitalised in the aftermath had better fortune: “In the other cases the patients were treated in the usual way and having recovered were discharged on Saturday morning, perhaps sadder and, it is to be hoped, wiser men,” says the report.

Within 15 minutes of the alarm being raised, hundreds of police officers, soldiers, and firefighters, commanded by Capt. James Robert Ingram, the first chief of the Dublin Fire Brigade, arrived on the scene. Later, they received praise for their bravery in putting out the fire and evacuating the occupants.

However, the Liberties sustained significant damage. 61 of the 5,000 barrels of alcohol were found, but others mysteriously vanished. "Three kegs were wheeled into the Coombe, and the result was that six persons were apprehended in a monstrous condition of intoxication, and numerous more were transported to hospital," according to the report.

Many households were forced to relocate as a result of the destruction of densely packed tenement buildings on Mill Street, Ardee Street, Chamber Street, and Cork Street as well as surrounding businesses. To stop civilians from trying to re-enter the burned-out ruins to find shelter, members of Ingram's brigade were sent.

The Irish Times reportedly reported "a case of canine suicide" as a result of the fire, along with the loss of several pigs. Tuesday evening, a dog entered William Eyre's house on Dominick Street Upper through an open door. The animal had consumed so much alcohol that it was "foaming at the mouth and apparently either rabid or suffering from delirium tremens."

The dog barked at the owner and ran crazily through the house, knocking over furniture. The dog fled upstairs, jumped out of a top-floor window, and "finished its existence on the road below" after Mr. Eyre repelled it with an iron bar.

The next Monday, at a meeting in the Mansion House, Lord Mayor Peter Paul McSwiney remarked that it was "wonderful" that fewer people had died.

"I was concerned that some people might be left in danger in the district's cellars and garrets because the window of opportunity for escape in some locations during the progression of the fire was so small. However, when I asked, I was pleased to find that no lives were lost in the massive fire.

He claimed that "any metropolis where there was a tendency to engage immoderately in drink" would have likely seen the "unhappy" overdose deaths.

“In the present case the unfortunate victims apparently could not restrain themselves, as I understand, from the burning fluid.”