What is peated whisky? 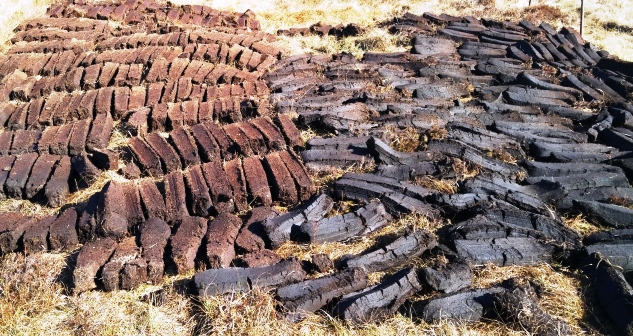 What is Peated Whisky?

Peated whisky has a unique smoky flavour given off by the compounds that are released by the peat fires used to dry malted barley. The level of exposure, length of time and the intensity of the peat smoke will be the key to the strength of the smoky flavour. One might ask, how did this style of whisky come about and why is it so popular?

Why the use of peat?

In the past, peat was the most readily accessible fuel in many areas of Scotland.

The science behind peat is:the accumulation of water in boggy areas slows down the decomposition of plant material such as moss, grass and tree roots which leads to the creation of peat.

Peat accumulates extremely slowly and bogs are often thousands of years old leading to peat being broadly classified as a fossil fuel. Peat was the primary domestic fuel in Scotland for a long time due to its ready availability in many parts of the country. And it fired not only the heating systems in homes but also the distillery kilns as well.

Where is peat used in the malting process?

The industrial revolution brought commercially malted barley to distilleries, but previously they necessarily had to malt their own. Malting makes the starches within barleycorns soluble so that the sugars may be converted into alcohol. In other words, malting tricks barleycorns into thinking spring has come. Barleycorns are steeped in water and allowed to germinate before the process is halted in the kiln.

When peat is burned to heat the kiln, it also produces smoke, this smoke has quite an aromatic nature to it. This aromatic smoke has a considerable influence on the malt during kilning, lending unique compounds called ‘phenols‘ to it. The general flavours one can expect are but are not limited to tar, ash, iodine and smoke.

Why have some distilleries stopped using peat?

Peated and non-peated whiskeys tend to split a room of whiskey drinkers. Think of it as people who prefer savoury or sweet, however, there are also people who like both and those where the time, moment, or occasion can sway either way. In ye olden days, due to a lack of alternative fuel sources, peat was the only source therefore whiskeys using entirely peated barley were the most common in the industry. Especially for the Highlands and the Isles, there was no gas pipeline, etc. However, then coal became readily available.

The Lowlands and Speyside were the first to convert to other fuel sources other than peat. Other developments came with the industrial revolution with the development of rail transport in Scotland led to the wide availability of coke (Coke is a grey, hard, and porous fuel with high carbon content and few impurities, made by heating coal or oil in the absence of air—a destructive distillation process). Coke burns more evenly, more consistently and with less smoke than peat, and so these regions were the first to realise the potential of un-peated whisky.

Many distilleries followed suit with ditching peat as a fuel source, but not all of them. Initially out of necessity, Islay to the west, Orkney to the north and several mainland distilleries held on to tradition. These distillers continued to use varying proportions of peat during the kilning process. This maintains a traditional and now largely unique style of whisky with lots of variation and flavour. And those which still have their own maltings such as Laphroaig on Islay, Highland Park in Orkney and even Balvenie in Speyside go one step further by peating relatively small quantities of barley for their own use.

The easiest way to get a whisky drinker into the world of whisky is via Irish or Bourbon, but they all eventually make his or her way to try peated whisky. Exploring those lighter, un-peated expressions which are common to the mainland generally comes first. But why should this be?

Perhaps it is fair to say, that peat is so much more than a stylistic trait or a differentiating factor which tempts whisky drinkers to test their mettle. It is much more than a simple addition of ‘smoky’ flavours which overwhelm all the many others. Peat was and still is a defining aspect of Scotch whisky, and we should approach it with reverence and an open mind from the start of our explorations.

Is there a  peat scale or index?

Yes, there is indeed, however, this is a relatively new idea for consumers. Peated whiskies are compared using a measure of phenol parts per million (PPM). This refers to the number of phenols in the malt itself rather than the contents of the finished whisky. As an example, some lighter whiskies might measure up to 20ppm, where a brand like Bruichladdich has been very active at the other end of the peat scale with their Octomore whiskies ranging from 167ppm to over 300ppm in one case! The rating is a blunt tool though and whiskies of similar ppm can still taste very different, so don't over-rely on this index to sway your judgement before trying these whiskies.

Is peating exclusive to Scotch?

This is a common misconception, the answer is no. India, Japan, New Zealand and Ireland all boast their own range of peated whiskies.

What peated whiskies to try?

There are many peated whiskies on offer out there and most bartenders or shops will be able to recommend drams that range across the PPM scale. These five peated whiskies give a great sense of what’s on offer.