What Whiskey Glass Should I Use? 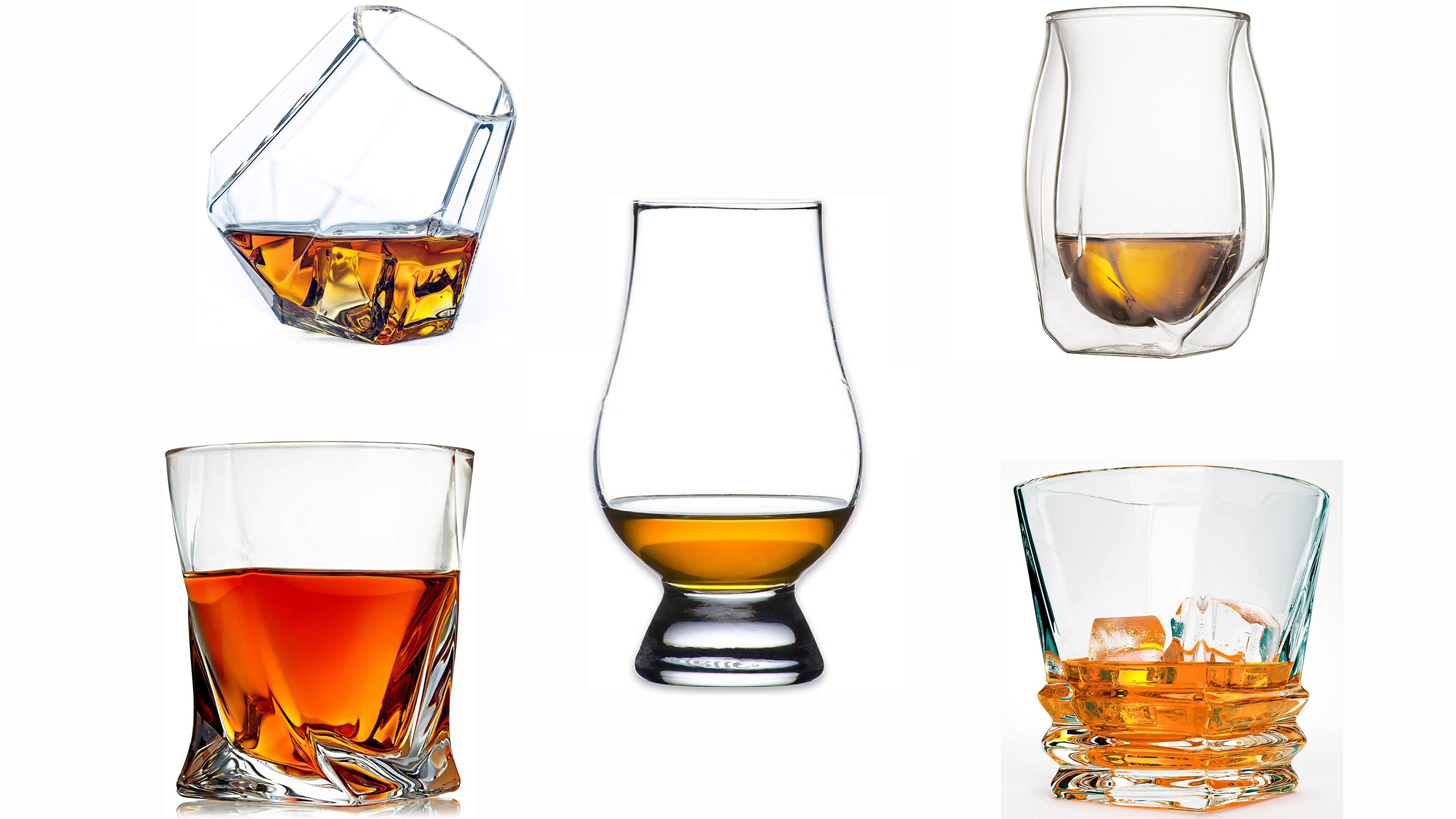 A Whiskey glass is specifically designed into a shape to enhance the experience of drinking and nosing whiskey, not just to look like a whiskey snob. Similar to wine glasses in shape, the most popular glasses feature a bulb body shape which allows aromas to collect and be directed through a narrow rim.

There are a wide variety of glasses to choose from, but which one is best for me? Choosing the correct whiskey glass can really help to improve the drinkers' enjoyment and there’s a shape and style of glass for every whiskey fan. These range from the compact Glencairn to the extravagant 'snifter'. This guide should help you find the perfect one for you. And even for those that aren't whiskey drinkers, these make the perfect gift for the whiskey drinker in your life. 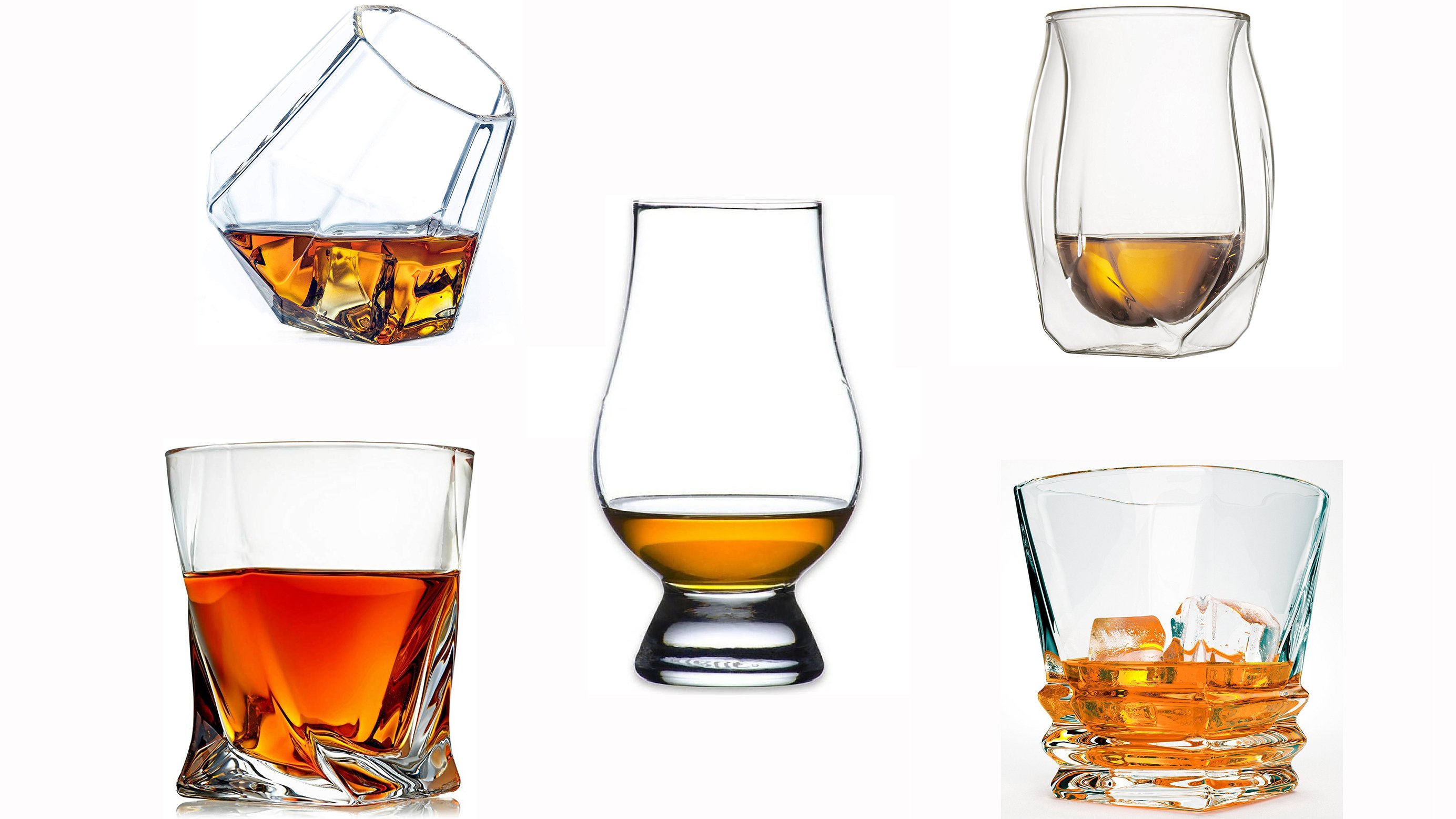 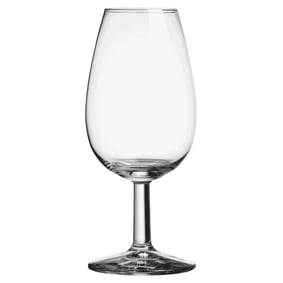 The tulip-shaped nosing glass is based on the copita, a traditional Spanish glass used to sample sherry. A favourite glass choice among master distillers, blenders and true whiskey connoisseurs around the world. Its long stem prevents the drinker’s hand from coming too close to the nose, while its bowl shape concentrates aromas through the slightly narrowed rim. The glass can be easily cradled so the spirit can be warmed if desired. Overall, this is a glass suited to the true appreciation of the nuances of single malt whiskey. 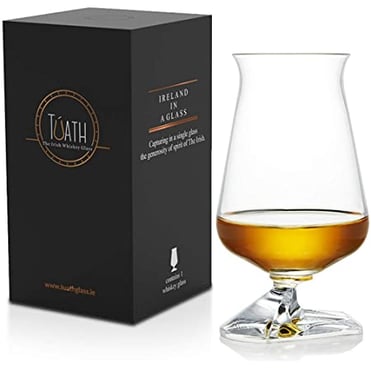 The TÚATH (tu – ah) – from the old Irish for family or nation, is a conical shaped nosing and tasting glass for whiskey that functions superbly by concentrating & capturing all the aromas and flavours that make Irish Whiskey unique.

With the re-birth of Irish Whiskey production, the development of new world-class distilleries, visitor centres and The Irish Whiskey Tourism Trail, it’s time for a contemporary glass to become the iconic symbol unifying Irish Whiskey drinkers around the world.

The generosity of Irish spirit is reflected in the enhanced chamber capacity delivering a more generous drinking experience. 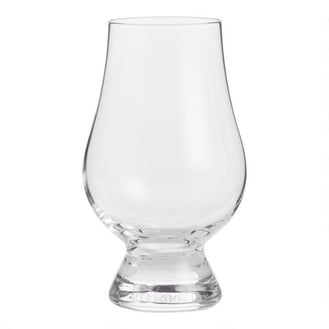 Similar in shape to the tulip-shaped glass above, the Glencairn glass is considered a more robust selection. Its short, solid base makes for a stable glass popular amongst those who don’t favour stems. Due to its size, the Glencairn is the perfect glass for learning how to swirl whisky too, a practice commonly used to open up the aromas of whisky for full appreciation. Again, a wide bowl shape that channels aromas towards a narrowed rim. This one’s the modern, less ‘showy’ relative of the tulip-shaped glass, and one solely dedicated to whiskey. 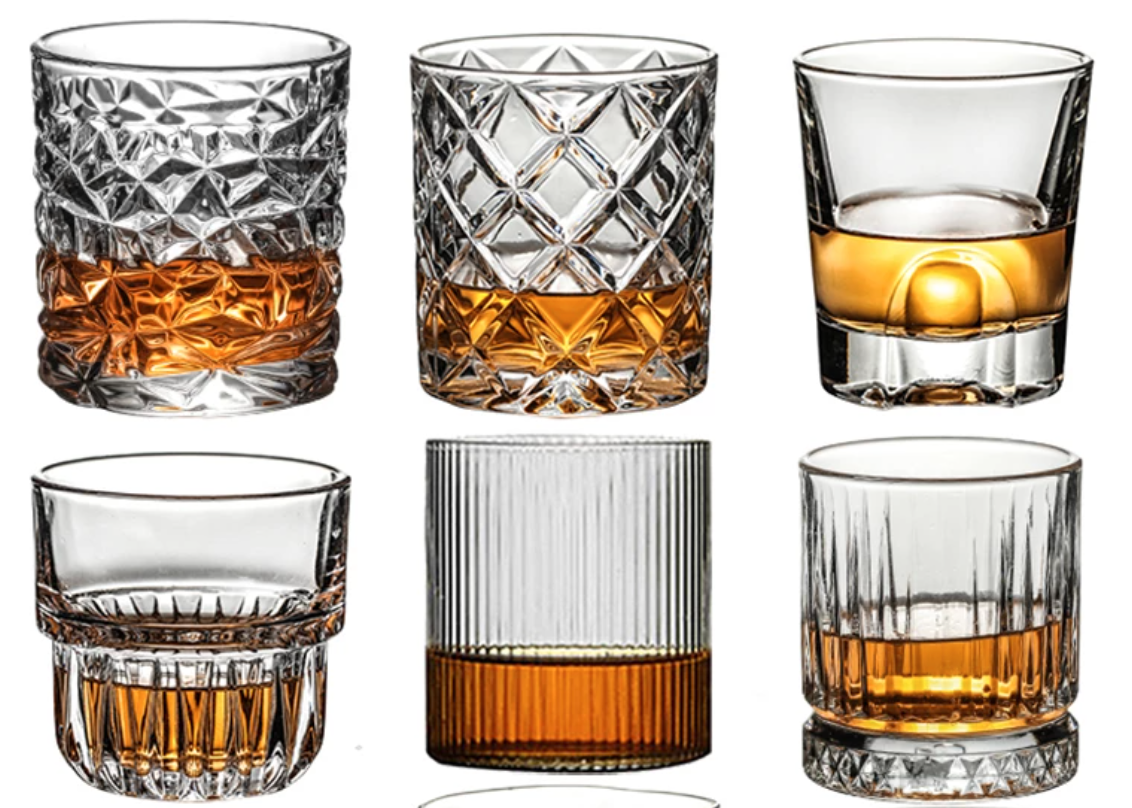 The most commonly recognised of all whiskey glasses worldwide. Due to its wide rim, the tumbler isn’t the most ideal glass for nosing, but it doesn’t need to be, this one is used for filling with ice and a whiskey of your choosing, It is also a great selection for serving up a range of classic cocktails. Its wide and robust base makes it ideal for ‘muddling’ cocktail ingredients, while its plain design lets simple drinks speak for themselves. A timeless glass, and a must-have for any whiskey fan open to the entire spectrum of the spirit’s enjoyment. 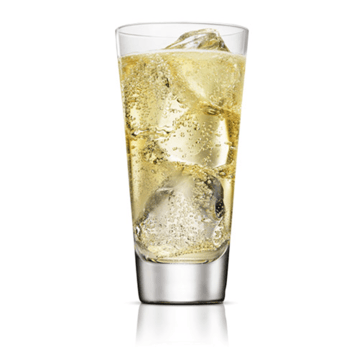 The taller brother of the tumbler and the glass associated with one of the most revered but simple whisky cocktails in the world: the Whiskey and soda, or ginger ale. It allows for plenty of ice, spirit and mixer, making for a long and relaxing drink. Today the highball is equally popular amongst fans of other simple whisky serves such as whisky and ginger ale or whisky and lemonade. It’s especially favoured in Japan. The shape doesn’t really matter with the highball. 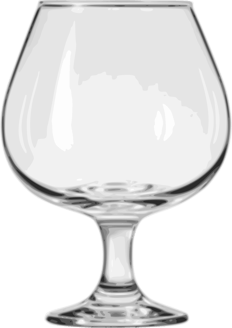 The snifter glass is commonly used for brandy, but it’s now very much a glass for the consumption of dark, aged spirits in general. They’re often designed so that, when held partially horizontal, the spirit doesn’t spill out. But all these opulent associations don’t necessarily make for a superior drinking vessel, the snifter’s extravagantly wide-body and tight rim can encourage the release of harsh ethanol vapours, overpowering other aromas. 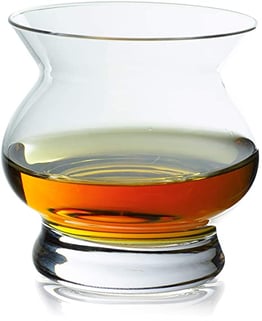 The NEAT whiskey glass is the ironic result of a mistake made in a glass blowing factory. Subsequent testing of the peculiarly shaped vessel revealed it was perfectly shaped to direct harsh alcohol vapours away from the nose. The NEAT glass, standing for Naturally Engineered Aroma Technology, squeezes the lighter molecules of ethanol out of its opening, leaving behind the heavier, more enticing molecules within whiskey. This is a glass well suited for appreciation, but also for people new to the spirits category in general for its ability to negate harsh aromas. Drinking from it may take a bit of getting used to because of its unusual shape.

What whiskey glass is your favourite? Let me know.

The Myths About Whiskey